The Launch of Bruce Mutard's 'The Sacrifice' 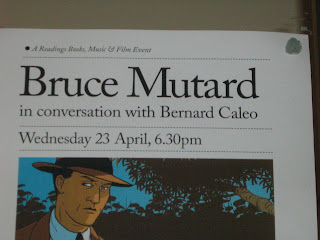 It happened on Wednesday night at Readings in Carlton, which was significant because the climactic, the penultimate, the key chapter of the book takes place on the 23rd of April as well - just 66 years ago, in 1942. And what a chapter it is - logging in at 56 pages, one-fifth of the book, it alone is as long as some graphic novels/book comics/call 'em what you will. 'The Sacrifice' - it's a big book, a big beautiful book, and you should all go out and get one now. 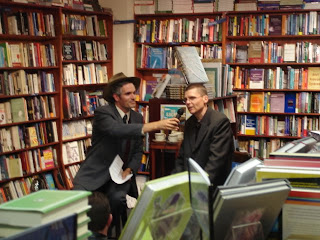 I was dressed a la Robert Wells, the main character from the book, and after Andrew from Readings introduced us, Bruce and I brewed up a pot of tea live on stage, as a way of referring to the endless cups of tea drunk in the book. While it brewed, I talked about the new 'wave' of publishing of 'book comics' by local book publishers, then about Bruce, then he came up and poured the teas which proceeded to cool over the next 20 minutes as we conducted a damn fine question-and-answer session about the book.

Then three calls of 'huzzah!' and the book was launched.

Susan was performing her show, 'Lolo and Lulu's review' that night, and needed to get there to sound-check and perform by 9pm, and I was minding the boys, so's I needed to hustle pretty quickly - clean up my tea things, tuck my lads under my arms, and be off, Brown (little Robert Lowell reference there), which was a great pity as there were folks there whom I could have talked to for some pleasant hours, but suppers needed to be supped and baths bathed. The call of the mild.

But I left Bruce signing books there at the Readings back counter, which is as it should be. Bonne chance, 'The Sacrifice': may you find your audience, and prosper, and ain't it grand to be looking forward to the next installment in the trilogy: 'The Fight'.

http://www.readings.com.au/news/carlton-gets-graphically-novel
Posted by Bernard Caleo at 5:54 AM